Just a few years ago, the onslaught of digital books seemed unstoppable. Sales of electronic books (E-books) were surging, people were extolling the convenience of carrying around a whole library of thousands of books on a portable digital tablet, phones or E-book readers such as the Amazon Kindle. In addition to portability, E-books allow for highlighting and annotating of key sections, searching for keywords and names of characters, even looking up unknown vocabulary with a single touch. It seemed only like a matter of time until E-books would more or less wholly replace old-fashioned physical books. But recent data seems to challenge this notion. A Pew survey released in 2016 on the reading habits of Americans shows that E-book reading may have reached a plateau in recent years and there is no evidence pointing towards the anticipated extinction of physical books.

The researchers Ozgun Atasoy and Carey Morewedge from Boston University recently conducted a study which suggests that one reason for the stifled E-book market share growth may be that consumers simply value physical goods more than digital goods. In a series of experiments, they tested how much consumers value equivalent physical and digital items such as physical photographs and digital photographs or physical books and digital books. They also asked participants in their studies questions which allowed them to infer some of the psychological motivations that would explain the differences in values.

In one experiment, a research assistant dressed up in a Paul Revere costume asked tourists visiting Old North Church in Boston whether they would like to have their photo taken with the Paul Revere impersonator and keep the photo as a souvenir of the visit. Eighty-six tourists (average age 40 years) volunteered and were informed that they would be asked to donate money to a foundation maintaining the building. The donation could be as low as $0, and the volunteers were randomly assigned to either receiving a physical photo or a digital photo. Participants in both groups received their photo within minutes of the photo being taken, either as an instant-printed photograph or an emailed digital photograph. It turned out that the participants randomly assigned to the digital photo group donated significantly less money than those in the physical photo group (median of $1 in the digital group, $3 in the physical group).

In fact, approximately half the participants in the digital group decided to donate no money. Interestingly, the researchers also asked the participants to estimate the cost of making the photo (such as the costs of the Paul Revere costume and other materials as well as paying the photographer). Both groups estimated the cost around $3 per photo, but despite this estimate, the group receiving digital photos was much less likely to donate money, suggesting that they valued their digital souvenir less.

In a different experiment, the researchers recruited volunteer subjects (100 subjects, mean age 33) online using a web-based survey in which they asked participants how much they would be willing to pay for a physical or digital copy of either a book such as Harry Potter and the Sorcerer’s Stone (print-version or the Kindle E-book version) or a movie such as The Dark Knight (DVD or the iTunes digital version). Participants were also asked how much “personal ownership” they would feel for the digital versus the corresponding physical items by completing a questionnaire scored with responses ranging from “strongly agree” to “strongly disagree” to statements such as “feel like it is mine”.  In addition to these ownership questions, they also indicated how much they thought they would enjoy the digital and physical versions.

The participants were willing to pay significantly more for the physical book and physical DVD than for the digital counterparts even though they estimated that the enjoyment of either version would be similar. It turned out that participants also felt a significantly stronger sense of personal ownership when it came to the physical items and that the extent of personal ownership correlated nicely with the amount they were willing to pay. 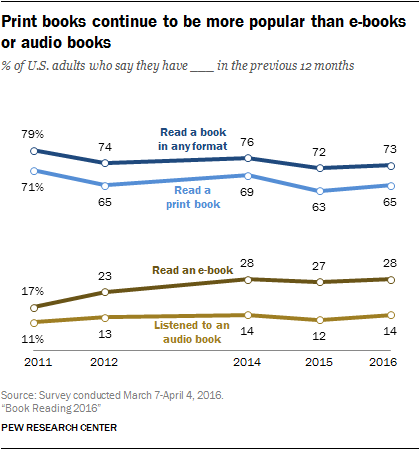 To assess whether a greater sense of personal ownership and control over the physical goods was a central factor in explaining the higher value, the researchers than conducted another experiment in which participants (275 undergraduate students, mean age of 20) were given a hypothetical scenario in which they were asked how much they would be willing to pay for either purchasing or renting textbooks in their digital and print formats. The researchers surmised that if ownership of a physical item was a key factor in explaining the higher value, then there should not be much of a difference between the estimated values of physical and digital textbook rentals. You do not “own” or “control” a book if you are merely renting it because you will have to give it up at the end of the rental period anyway. The data confirmed the hypothesis. For digital textbooks, participants were willing to pay the same price for a rental or a purchase (roughly $45), whereas they would pay nearly twice that for purchasing a physical textbook ($88). Renting a physical textbook was valued at around $59, much closer to the amount the participants would have paid for the digital versions.

This research study raises important new aspects for the digital economy by establishing that consumers likely value physical items higher and by also providing some insights into the underlying psychology. Sure, some of us may like physical books because of the tactile sensation of thumbing through pages or being able to elegantly display are books in a bookshelf. But the question of ownership and control is also an important point. If you purchase an E-book using the Amazon Kindle system, you cannot give it away as a present or sell it once you are done, and the rules for how to lend it to others are dictated by the Kindle platform. Even potential concerns about truly “owning” an E-book are not unfounded as became apparent during the infamous “1984” E-book scandal, when Amazon deleted purchased copies of the book – ironically George Orwell’s classic which decries Big Brother controlling information –from the E-book readers of its customers because of some copyright infringement issues. Even though the digital copies of 1984 had been purchased, Amazon still controlled access to the books.

Digital goods have made life more convenient and also bring with them collateral benefits such as environment-friendly reduction in paper consumption. However, some of the issues of control and ownership associated with digital goods need to be addressed to build more trust among consumers to gain more widespread usage.

Note: An earlier version of this article was first published on the 3Quarksdaily blog.

This site uses Akismet to reduce spam. Learn how your comment data is processed.