I recently wrote an op-ed piece for the Guardian in which I suggested that there is too much of an emphasis on ‘infotainment’ in contemporary science journalism and there is too little critical science journalism. The response to the article was unexpectedly strong, provoking some hostile comments on Twitter, and some of the most angry comments seem to indicate a misunderstanding of the core message. 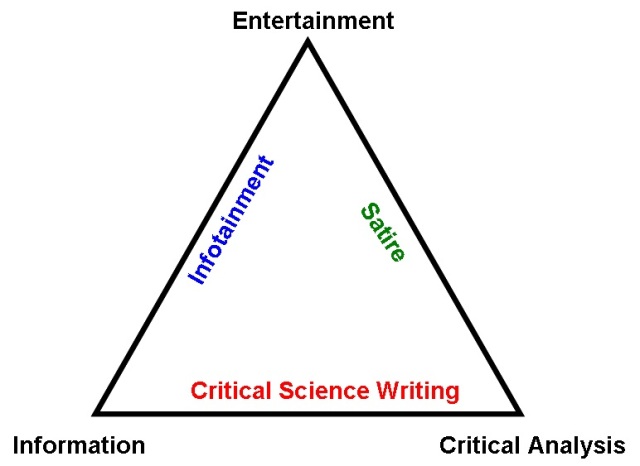 Instead of just discussing these distinctions in abstract terms, I will use some of my prior blog-posts to illustrate differences between different types of science writing, such as infotainment, critical science writing or scientific satire. I find it easier to critique my own science writing than that of other science writers, probably because I am plagued by the same self-doubts that most writers struggle with. The following analysis may be helpful for other science writers who want to see where their articles and blog-posts fall on the information – critical analysis – entertainment spectrum.

Infotainment science writing allows me to write about exciting or unusual new discoveries in a fairly manageable amount of time, without having to extensively review the literature in the field or perform an in-depth analysis of the statistics and every figure in the study under discussion. After providing some background for the non-specialist reader, one can focus on faithfully reporting the data in the paper and the implications of the work without discussing all the major caveats and pitfalls in the published paper. This writing provides a bit of an escapist pleasure for me, because so much of my time as a scientist is spent performing a critical analysis of the experimental data acquired in my own laboratory or in-depth reviews of scientific manuscripts and grants of either collaborators or as a peer reviewer. Infotainment science writing is a reminder of the big picture, excitement and promise of science, even though it might gloss over certain important experimental flaws and caveats of scientific studies.

This blog-post discusses a paper published in the FASEB Journal, which suggested that white (“bad”) fat cells could be converted into brown (“good”) fat cells using Viagra. The study reminded me of a collision between two groups of spam emails: weight loss meets Viagra. The blog-post provides background on white and brown adipose tissue and then describes the key findings of the paper. A few limitations of the study are mentioned, such as the fact that the researchers never document weight loss in the mice they treated, as well as the fact that the paper ignores long-term consequences of chronic Viagra treatment. The reason I consider this piece an infotainment style of science writing is that there were numerous criticisms of the research study that could have been brought to the attention of the readers. The researchers concluded the fat cells were being converted into brown fat using only indirect measures without adequately measuring the metabolic activity and energy expenditure. It is not clear why the researchers did not extend the duration of the animal studies to show that the Viagra treatment could induce weight loss. If all of these criticisms had been included in the blog-post, the fun Viagra-weight loss idea would have been drowned in a whirlpool of details.

The idea of “icky” sweat glands promoting wound healing was the main hook. Smelly apocrine sweat glands versus eccrine sweat glands are defined in the background of this blog-post, and the findings of the paper published in the American Journal of Pathology are summarized.  Limitations of the study included little investigation of the mechanism of regeneration, whether cells primarily proliferate or differentiate to promote the wound healing and an important question: Does sweating itself affect the regenerative capacity of the sweat glands? Although these limitations are briefly mentioned in the blog-post, they are not discussed in-depth and there is no comparison made between the observed wound healing effects of sweat gland cells to the wound healing capacity of other cells. This blog-post is heavy on the “information” end, and it provides little entertainment, other than evoking the image of a healing sweat gland.

Critical science writing is exceedingly difficult because it is time-consuming and challenging to present critiques of scientific studies in a jargon-free manner. An infotainment science blog-post can be written in a matter of a few hours. A critical science writing piece, on the other hand, requires an in-depth review of multiple studies in the field to better understand the limitations and strengths of each report.

This blog-post describes an important negative study conducted in Switzerland. Bone marrow cells were injected into the hearts of patients in one of the largest randomized cardiovascular cell therapy trials performed to date. The researchers found no benefit of the cell injections on cardiac function. This research has important implications because it could stave off quack medicine. Clinics in some countries offer “miracle cures” to cardiovascular patients, claiming that the stem cells in the bone marrow will heal their diseased hearts. Desperate patients, who fall for these scams, fly to other countries, undergo risky procedures and end up spending $20,000 or $40,000 out of pocket for treatments that simply do not work. This blog-post is in the critical science writing category because it not only mentions some limitations of the Swiss study, but also puts the clinical trial into context of the problems associated with unproven therapies. It does not specifically discuss other bone marrow injection studies, but it provides a link to an editorial I wrote for an academic journal which contains all the pertinent references. A number of readers of the Guardian article raised the question whether one can make such critical science writing appear entertaining, but I am not sure how to incorporate entertainment into this type of an analysis.

This blog-post was a review of multiple distinct studies on converting fibroblasts – either found in the skin or the hearts – into beating heart cells. The various research groups described the outcomes of their research, but the studies were not perfect replications of each other. For example, one study that reported a very low efficiency of fibroblast conversion not only used cells derived from older animals but also used a different virus to introduce the genes. The challenge for a critical science writer is to decide which of these differences need to be highlighted, because obviously not all differences and discrepancies can be adequately accommodated in a single article or blog-post. I decided to highlight the electrical heterogeneity of the generated cells as the major limitation of the research because this seemed like the most likely problem when trying to move this work forward into clinical therapies. Regenerating a damaged heart following a heart attack would be the ultimate goal, but do we really want to create islands of heart cells that have distinct electrical properties and could give rise to heart rhythm problems?

In closing, I just want to briefly mention scientific satire – satirical or humorous descriptions of real-life science. One of the best science satire websites is PhD Comics, because the comics do a brilliant job of portraying real world science issues, such as the misery of PhD students and the vicious cycle of not having enough research funding to apply for research funding. My own attempts at scientific satire take the form of spoof news articles such as “Professor Hands Out “Erase Undesirable Data Points” Coupons To PhD Students” or “Academic Publisher Unveils New Journal Which Prevents All Access To Its Content”. Science satire is usually not informative, but it can provide entertainment and some critical introspection. This kind of satire is best suited for people with experiences that allow them to understand inside jokes. I hope that we will see more writing that satirizes the working world of how scientists interpret data, compete for tenure and grants or interact with graduate students.

//storify.com/jalees_rehman/reactions-to-critical-science-journalism-piece-in.js[View the story “Reactions to the “Critical Science Journalism” piece in The Guardian” on Storify]

This site uses Akismet to reduce spam. Learn how your comment data is processed.